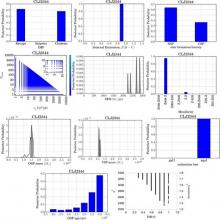 Star formation in galaxies at the centre of cooling-flow galaxy clusters is an important phenomenon in the context of formation and evolution of massive galaxies in the Universe. Yet, star formation rates (SFRs) in such systems continue to be elusive. We use our Bayesian-motivated spectral energy distribution (SED)-fitting code, bayescool, to estimate the plausible SFR values in the brightest cluster galaxy of a massive, X-ray luminous galaxy cluster, Phoenix. Previous studies of Phoenix have resulted in the highest measurement of SFR for any galaxy, with the estimates reaching up to 1000 M⊙ yr−1. However, a very small number of models have been considered in those studies. bayescool allows us to probe a large parameter space. We consider two models for star formation history, instantaneous bursts and continuous star formation, a wide range of ages for the old and the young stellar population, along with other discrete parameters, such as the initial mass function, metallicities, internal extinction and extinction law. We find that in the absence of any prior except that the maximum cooling rate <3000 M⊙ yr−1, the SFR lies in the range (2230 − 2890) M⊙ yr−1. If we impose an observational prior on the internal extinction, E(B−V) < 0.6, the best-fitting SFR lies in (454 − 494) M⊙ yr−1, and we consider this as the most probable range of SFR values for Phoenix. The SFR dependence on the extinction is a reflection of the standard age-extinction degeneracy, which can be overcome by using a prior on one of the two quantities in question.